World No. 1 Novak Djokovic will be aiming to capture his third Rolex Monte-Carlo Masters title this week when he returns to the Tour in Monaco.

However, before the serious business starts on Sunday, the top seed joined former World No. 3 Stan Wawrinka at the Place du Casino, where the pair competed in an entertaining mini-match in front of an excitable crowd.

Djokovic and Wawrinka hit trick shots, posed for photos and chatted with each other as they delighted the fans in Monte-Carlo with their array of skills. 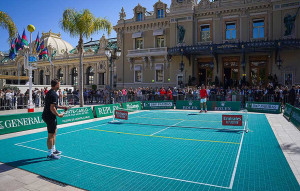 The singles stars arrived at the Monte-Carlo Country Club earlier this week and trained together on Thursday on Court Rainier III ahead of the third ATP Masters 1000 tournament of the season.

Djokovic lifted the trophy on the clay in Monte-Carlo in 2013 and 2015 and is competing in just his second event of the season after reaching the quarter-finals in Dubai in February.

Meanwhile, Switzerland’s Wawrinka arrives at the clay-court tournament having not played at a tour-level event since last March due to injury. The former World No. 3 triumphed in Monte-Carlo in 2014 and accepted a wild card into the draw.

Djokovic will face Alejandro Davidovich Fokina or Marcos Giron in his first match and could meet #NextGenATP Spaniard Carlos Alcaraz in a blockbuster quarter-final clash. Wawrinka is in the bottom quarter of the draw and will open against Alexander Bublik.