In Aid Of Amade Mondiale Monaco

Much fun was had at a charity exhibition on Saturday at the Monte-Carlo Country Club in support of Amade Mondiale Monaco, a charity that looks after the welfare of children worldwide.

Amade was founded in 1963 in accordance with the wishes of Princess Grace of Monaco, with the vision of a world where every child, whatever their social, religious or cultural origins, would have the opportunity to fulfill their potential.

”It was fun and great to be part of the exhibition today to raise awareness for a worthy cause, which helps so many underprivileged children globally.” said Djokovic, the 2013 and 2015 Monte-Carlo Rolex Masters titlist.

Her Royal Highness Princess Caroline of Hanover is President of Amade Mondiale Monaco. 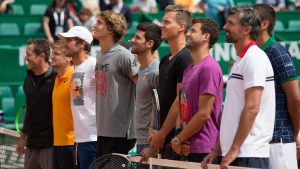