Wednesday 3 February 2016. It was in the Salle America of the Monte-Carlo Bay Hotel and in the presence of the media, numerous Monegasque personalities and representatives of the tournament partners that the traditional Monte-Carlo Rolex Masters press conference took place. Organised by the SMETT (Société Monégasque pour l’Exploitation du Tournoi de Tennis) from 9 to 17 April 2016, in the prestigious setting of the Monte-Carlo Country Club, this ATP World Tour Master 1000 is the first major European tournament that opens the clay season.

During this conference and in the presence of David Goffin, the Belgian player, ranked 16 in the world and finalist of the Davis Cup 2015, the Tournament Director, Zeljko Franulovic, revealed the highlights of the 110th edition and presented in exclusivity the new 2016 tournament poster, designed by the talented British artist Andrew Davidson, who also created the last six posters for the Monte-Carlo Rolex Masters.

“Again last year, we were very fortunate to have an exceptional Main Draw with the participation of most of the top ten world players including Novak Djokovic, Rafael Nadal and Roger Federer. The 2015 event confirmed Novak Djokovic’s dominance on the circuit. He won his second title in Monaco in three years. Since then, the world number one player has confirmed his great form by winning Wimbledon, the US Open, the London Masters and, no longer than three days ago, the Australian Open. What a champion!“, commented Zeljko Franulovic. 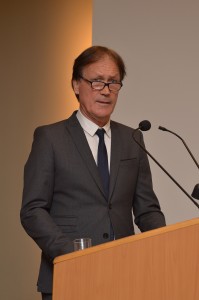 Even if the final list of 45 players automatically included in the Main Draw will not be known until 15 March, the official ATP entry deadline, the Tournament Director appears very confident about the 2016 Main Draw, which promises to be just as exceptional. Novak Djokovic, the world number one, Rafael Nadal, eight-time winner of the tournament and Stan Wawrinka, number 4 world player were among the first to enter. Zeljko Franulovic recommended that tennis fans reserve their seats as quickly as possible since, as every year, the Tournament creates a great enthusiasm and the last four days are fully booked in reservation.

The official kickoff of the 110th edition of the tournament will take place in an emblematic and centenary-old establishment of the Principality, the Oceanographic Museum, with the Main Draw on Saturday 9 April at 12.00 pm. This year’s edition promises to be very festive, off the courts as well, with an opening evening, the Launch Party, on Saturday 9 April, initiated by Melanie-Antoinette de Massy, in the presence of the players and various celebrities, without forgetting the traditional Players’ evening and the Grande Nuit du Tennis…

Beside Rolex, title sponsor, the Monaco organizers also benefit from the loyalty of other prestigious partners, as confirmed by the renewal of the sponsorship agreements with BNP Paribas, main partner, Façonnable, Malongo, Ricoh and Onet, but also from the arrival of new important partners such as Emirates the “premium partner” of the ATP and Peugeot which, besides being the “official car of the ATP World Tour”, has also become the “official car of the tournament”.

This Monegasque tournament is continuously growing and attracting an evenmore enthusiastic audience. Proof of this comes with the “ATP Award of Excellence 2015” for the best “Fan Experience” in Europe, which the Monegasque organizers were awarded by the highest governing body of world tennis. A fine mark of recognition for this centenary-old tournament, unique in the world.